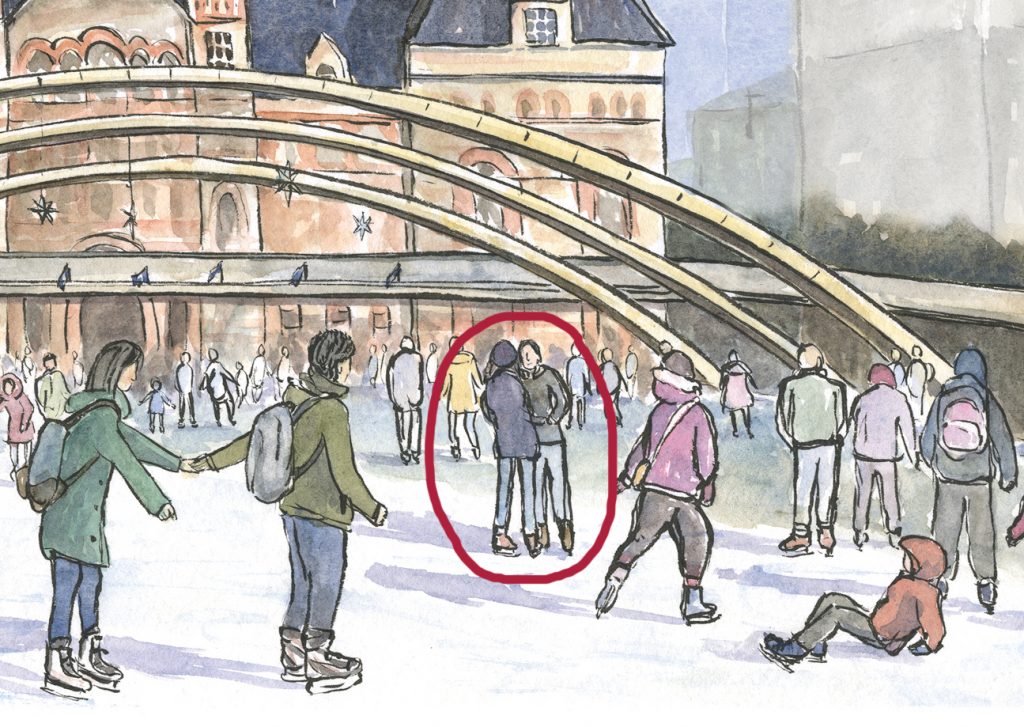 It was an unseasonably warm February in Toronto, and all month the conditions had been perfect for skating: cold enough for the ice to remain frozen, but mild enough that your fingers won’t freeze without wearing gloves. One of the most popular spots for skating in the heart of downtown is, without a doubt, Nathan Phillips Square, a large public plaza that is anchored by the old City Hall to the east, and the present City Hall to the north. At the centre of the Square is a large water fountain (Ai Weiwei used it as a setting for a sculpture series in 2013) that turns into a skating rink in the winter, transforming the space into a Winter Wonderland.

Although Nathan Phillips Square has always been a prime tourist spot, the addition of a large “TORONTO” logo in 2015 for the Pan-Am Games greatly revitalized the space, and made the Square instantly iconic. Both tourists and locals alike have embraced the sign at once, and the allure of the brightly lit letters have drawn countless photographers to the site. The colours of the signs even change regularly to reflect the heartbeats of the city, such as rainbow colours to celebrate LGBTQ Pride week, or blue and white to cheer on Toronto’s beloved baseball team, the Blue Jays. It is now astounding to imagine a time when the signs have not stood at the foot of the Nathan Phillips fountain.

The clouds were ominously dark when I strolled by the skating rink, but the sun kept breaking through, casting warmth on the flushed cheeks of skaters. It was a lazy Sunday afternoon and Nathan Phillips Square was filled with people of all ages – young families, school-friends and lovers, hockey skaters and figure skaters and elderly folks skating for the first time. Pop music boomed out of the speakers at the edge of the rinks, and the line for hot chocolate was healthy. The “TORONTO” sign was a popular meeting place and sitting area, as well as for the usual selfies and people-watching.

“Happy Sunday, folks,” an enthusiastic voice boomed out from the speakers. “Yup, it’s a beautiful one and this is as Canadian as it gets. Welcome to Nathan Phillips!”

I stood at the side of the rink, just to the left of a guy with a large video-camera (probably from the local news station, I thought), enjoying this classic winter scene. Behind us, Toronto City Hall stood silently, watching over its citizens. Even if nobody would call the design of Nathan Phillips Square “beautiful”, its function as a vibrant public space is undeniably successful. The public skating rink is the ultimate equalizer and democratic space. There is no entry fee and no sign-up lists. If you don’t have your own skates, you can rent a pair for a few dollars. If you don’t want to skate, you can still have plenty of entertainment watching the four-year-olds take their falls on the ice and get up to try again, or the group of teenage girls all holding hands and giggling as they skate together in a row.

Suddenly, there was a commotion on the ice, and I turned my attention back to the rink. A crowd had formed a circle around something, and – cranking my neck – I caught a glimpse of a skater passing a bouquet of flowers to a young man on his knees, who presented it along with a black ring case to his girlfriend standing in front of him. With a start, I realized that the cameraman was no longer beside me, but right in the centre of the proposal, camera directly aimed at the lovers.

The young woman held her hand over her mouth in shock while the crowd shouted encouragements. “Say yes! Say yes!” They chanted. Finally, beaming, she took the flowers and nodded. A cheer erupted as the young man got up to his feet and kissed her, slid the ring on her finger, and held up their joint hands in the air.

Everyone clapped, thrilled by the happy ending; then, as if silently agreeing to let the couple have their private moment, the crowd quickly dispersed, and the rink returned to its normal clockwise frenzy.

“Ah, is there anything sweeter than true love?” the deep voice on the speakers mused, as a bright ray of sunshine broke through the clouds and onto the ice. “Congratulations, love birds! Thank you for warming our hearts on this wonderful day.”

The cameraman made his way back to my side, his equipment resting on his shoulder. I looked over at him, and as our eyes met, he winked; then, smoothly procuring a pair of sunglasses from out of nowhere and putting it on, he once again blended into the crowd, waiting for his next story. I smiled and nodded at him in acknowledgement before I turned to leave, looking for my next one.